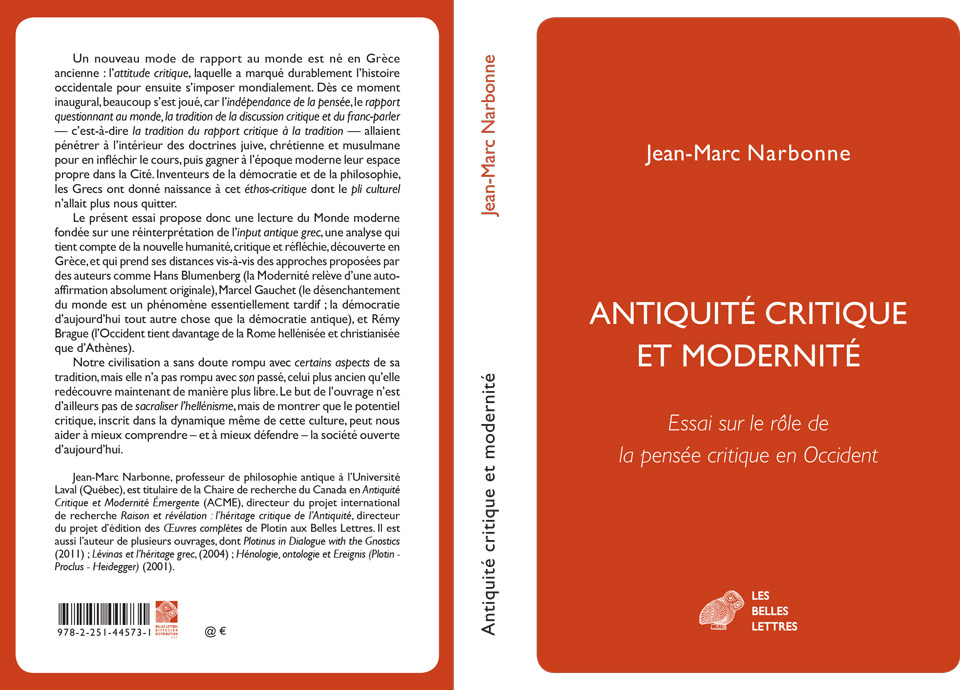 It is in Ancient Greece that is born what we call the critical stance, that new way of relating to the world that left its mark on the course of Western history and increasingly flourishes around the globe. Much is decided right from the moment of inception: the independence of thought, the interrogative relation to the world, the tradition of critical debate, in short, the tradition of relating critically to the tradition itself. This Greek heritage will make its influence felt over the course of Jewish, Christian and Muslim doctrinal history, before assuming in modernity its proper place in the city. As the inventors of democracy and philosophy, the Greeks gave birth to a critical-ethos, which irrevocably transformed our culture.

This essay proposes a rereading of the modern world, on the basis of a reinterpretation of the ancient Greek breakthrough taking into account the discovery of a new, critical and self-reflective humanity. As such, it offers a critique of the approaches of authors such as H. Blumenberg (modernity is brought about by a self-affirmation that is absolutely original), M. Gauchet (the disenchantment of the world is essentially a recent phenomenon; our democracy has nothing more to do with ancient democracy) and R. Brague (the West owes more to a hellenised and christianised Rome, than it does to Athens).

Our culture has no doubt split from certain aspects of its tradition, but it has not broken away from what is its past, that which is more ancient and which we now have a greater liberty to rediscover. The goal of this essay is not to sacralise Hellenism, but rather to demonstrate that there is a critical potential in the internal dynamic of Greek culture that can help us to grasp, and more importantly to defend, the open society in todays world.

Jean-Marc Narbonne, professor of ancient philosophy at the University of Laval (Québec), holds the Research Chair of Canada in Critical Antiquity and Emergent Modernity and is director of the international research project Reason and Revelation: The Critical Heritage of Antiquity, as well as new edition of the collected works of Plotinus, published with Belles Lettres. He is also the author of numerous works, including Plotinus in Dialogue with the Gnostics (Brill, 2011); Lévinas et l’héritage grec, (Vrin, 2004); Hénologie, ontologie et Ereignis (Plotin – Proclus – Heidegger) (Belles Lettres, 2001).